Between the mid-19th century and today, the Sacramento-San Joaquin Delta has undergone vast changes to its channel geometry (construction of cut channels, channel widening), bathymetry (shipping channel dredging, hydraulic mining sediment), marsh area (levee construction, marsh draining, flooded islands), inflow hydrology (major dam construction, urbanization), and sea level rise. From a scientific, planning, or even regulatory point of view, it is important to understand how the Delta of the past functioned in comparison to the Delta of the present. How do historical tidal ranges and in-channel velocities compare to present day values? Did the low salinity zone move and function similar to how it behaves today? How have advective and dispersive transport patterns changed?

Our historical Delta modeling work was performed in collaboration with a large team of researchers, under the direction and funding of the Metropolitan Water District of Southern California (MWD). This team included the San Francisco Estuary Institute (SFEI), whose comprehensive report on the Delta’s historical ecology provided the framework for this study, the University of California Davis Center for Watershed Science (UCD-CWS), the California Department of Water Resources (DWR), and several others. 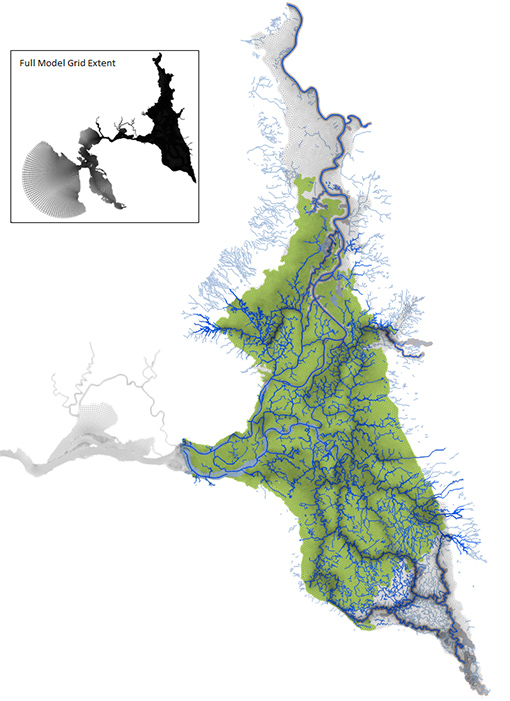 Work for this project involved the development and refinement of RMA’s 3D modeling and results visualization capabilities as well as the specific construction of 3D models for the present-day and historical Delta. The construction of the historical Delta model was particularly interesting because of the challenges involved in converting nautical maps from the 1850s, with channel depths measured relative to the water surface at low tide, to a digital elevation model (DEM) surface, referenced to the absolute datum NAVD88. The iterative process of DEM construction, identifying problem areas in the DEM through model result visualization and knowledge of the historical system, and DEM reconstruction was carried out as an iterative, collaborate process involving RMA, UCD-CWS, and SFEI. Verifying that the historical Delta model was functioning correctly included comparisons to sparse historical accounts of tidal range and marsh plain inundation as well as general Delta-wide visualizations, such as marsh plain inundation dynamics and maximum channel velocities to indicate channel stability. 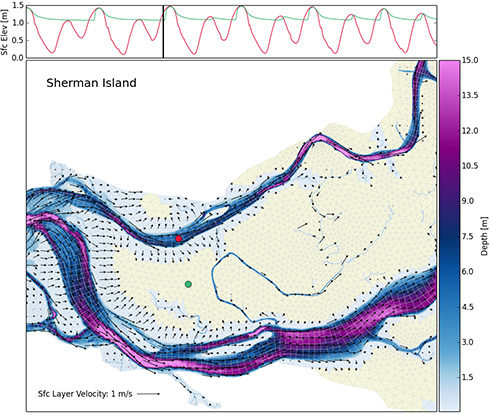 Work for this project is in progress, and results will be presented at the 2015 California Water and Environmental Modeling Forum  (CWEMF) Annual Meeting.